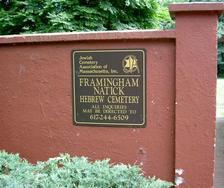 When it became clear that a Jewish community was going to be a permanent part of the Framingham-Natick area, the local Jewish families recognized that they would need a Jewish cemetery.

Somewhat discouraged after being turned down by the Town of Framingham for a cemetery permit, Lazarus Marinofsky, a Natick businessman and resident, turned to the town of Natick for a solution. In 1909 a permit was granted to the Independent Hebrew Workmen’s Cemetery Association of Framingham.  On October 1909, they purchased three lots south of Pond Street, Natick—a plot known as the Fairview Terrace Tract, from Lucinda Farnsworth. Ten years later in 1919, the land was transferred to the newly formed Hebrew Cemetery Association. By then, there had been a half dozen or more burials. 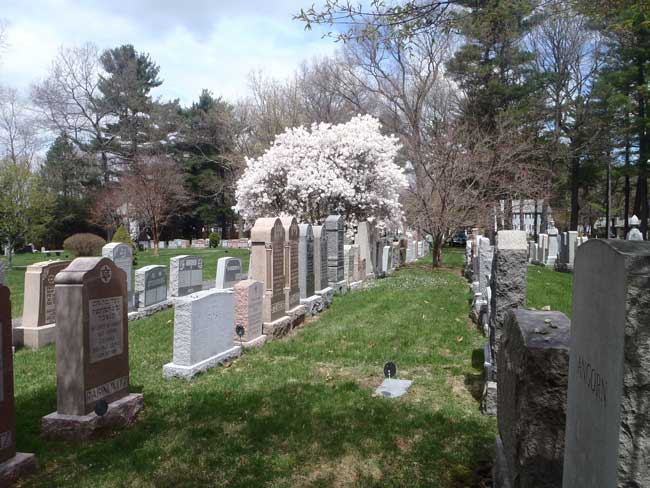 The chapel that stands on the Windsor Avenue side of the cemetery was built in 1919 to serve as a sheltered entryway and a quiet place for prayer and reflection. A plaque inside the chapel credits Morris Shindler as the donor and names Morris Russin as first president of the association.

The single requirement to join the Hebrew Cemetery Association and have the right to purchase a gravesite was membership in one of the Framingham-Natick area congregations.

Sadly, the first interments were children. Eleven year old Leo Volk, who died in 1913, seems to have been the earliest burial. Max Katz, age 2 was buried in August 1914 and still other children followed. The first adult burial was that of Joseph Sharegratsky in 1916, age 81. His wife Gosse Kapler, age 78 joined him six years later. Their headstone reads, “The first old folks buried in this cemetery.”

When the Coolidge Street synagogue was destroyed by fire in March 1949, the damaged Torah scrolls were buried not far from the Sharegratsky monument. 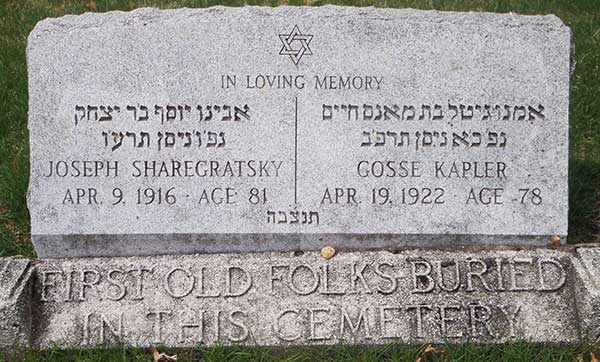 The first adults to be buried received special recognition at the Framingham-Natick Hebrew Cemetery. (Above) As did the Torahs from the synagogue that were destroyed by fire in 1979. 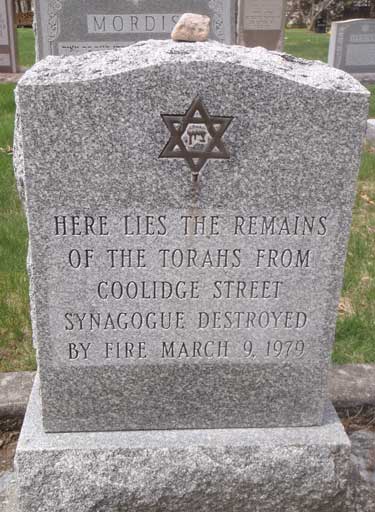 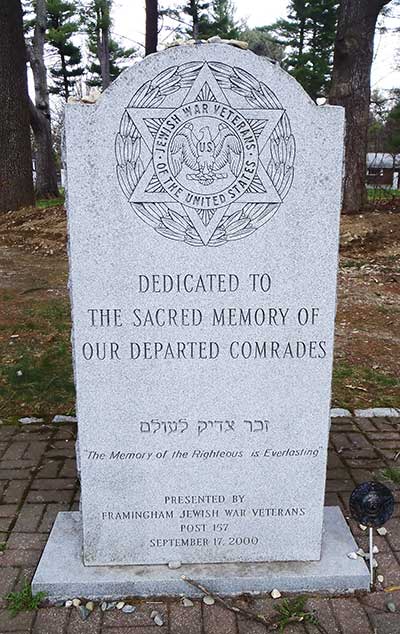 In May 2003, Temple Beth Am, Framingham initiated the dedication of a Holocaust memorial to the 1.5 million children who perished in The Shoah. And a memorial has been recently installed in memory of the Six Million. The Jewish War Veterans, Framingham Post also erected a memorial honoring area Jews who served in the U.S. Armed Forces.

The cemetery continues today to bear witness to the history of the Jews of Framingham and Natick. It is the oldest existing Jewish institution in the area.