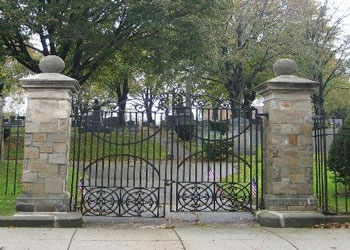 The Ohabei Shalom Cemetery is the first Jewish cemetery established in Massachusetts. Since its founding in 1844, the cemetery has survived through great changes in the Boston Jewish community. From the arrival of impoverished refugees and through a tempered integration into the American culture by an educated and economically successful group. Today only a handful of burials, usually to members of the old families, take place at the Cemetery. At the turn of the 20th century, this part of Boston was home to New England’s largest Jewish population. The Cemetery now represents one of the last vestiges of East Boston’s Jewish community. 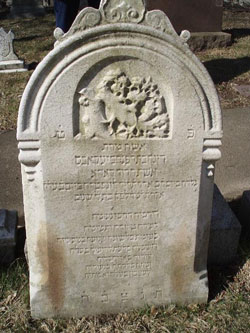 The physical design of the Ohabei Shalom Cemetery reflects the immigration patterns of Jews to the United States in the 19th and first half of the 20th centuries. The Cemetery's early crowded gravesite configuration, Hebrew inscriptions, and traditional iconography all reflect Jewish burial practices in Europe. The headstones document the many nations from which residents emigrated, including Germany, Poland, and Russia. The gradual disappearance within the Cemetery of traditional Jewish and European-inspired characteristics and their replacement with American funerary styles reflects the assimilation of the Jewish community into the wider society.

In the second half of the 20th century, large numbers of Boston’s Jews moved out to the suburbs of Brookline, Newton and beyond. Many alternatives became available to the Cemetery in East Boston, leading to its eventual decline. These changes also contributed to a crisis of succession in the management of many once-independent Jewish cemeteries and some became neglected or abandoned. The Jewish Cemetery Association of Massachusetts (JCAM) was formed in 1984 to provide for the continuity and preservation of Jewish cemeteries. JCAM acquired Ohabei Shalom Cemetery in 1996 and now manages and maintains the Cemetery. The Cemetery and its Chapel are listed on the National Register of Historic Places. 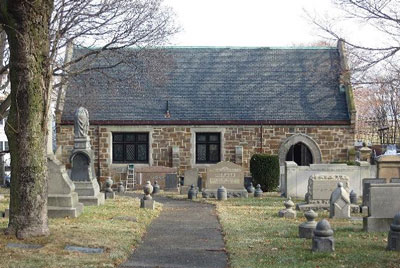 View of Chapel from the cemetery grounds

Puritan culture in the Massachusetts Bay Colony, reliant as it was on the Old Testament, recognized a kinship with Jewish customs, language, and even in self-identity. However, this did not preclude prejudice towards Jews and other religious minorities. In Boston, despite the “pious Hebraisms of the Puritans,” Jews were not particularly welcome. The Sephardic Jews who came to Boston in the 17th century conducted trade, stayed briefly and departed. 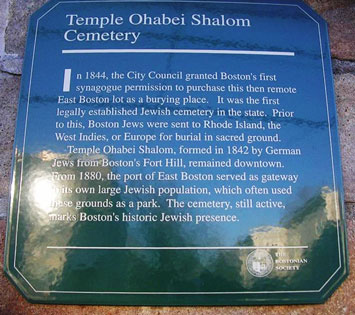 Commemorative plaque from The Bostonian Society

Beginning in the 1820’s, a steady stream of Jewish immigrants began to arrive in Boston. This growing community yearned for their own religious institutions. In 1842, a fledgling congregation of ten men met to celebrate the Jewish New Year in the home of Peter Spitz. The following year, 18 men gathered to formally establish the congregation as Ohabei Shalom (Lovers of Peace). In May 1843, at the celebration of the bris (circumcision) of the Spitz’ firstborn son, Ohabei Shalom elected its officers as its first official act.

These first few families are thought to have emigrated from central Europe sometime between 1837 and 1843. For ten years, in ever-increasing numbers, the congregation observed religious rites in a series of rented rooms and homes. Their names and occupations provide insight into their identities: Peter Spitz, a cloth cap manufacturer; Bernard Fox, a hotel keeper; Charles Heinemann, a peddler; Jacob Norton, a furrier. (Spitz, Fox, and members of the Heinemann and Norton families are interred at Ohabei Shalom Cemetery.) 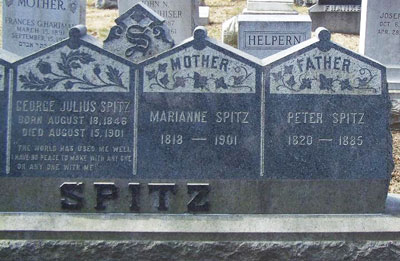 Obtaining proper burial space was more important to the congregation than building a house of worship. The group set about this critical task in a petition to the city in April, 1844, when they requested 100 square feet for its exclusive use in a corner of what is now known as the Bennington Street Burying Ground. The petition was denied for unknown reasons. Undeterred, the congregation purchased a 10,000 square foot site nearby at the corner of Byron and Homer Streets for $200. The synagogue members, now numbering 40, were willing to pay the sizeable sum of $5 each toward procuring this land. The City of Boston formally approved its use as a Jewish cemetery in October, 1844. The hillside land was hardly desirable for burial purposes, but it was affordable and offered permanence to a group whose existence felt anything but secure. 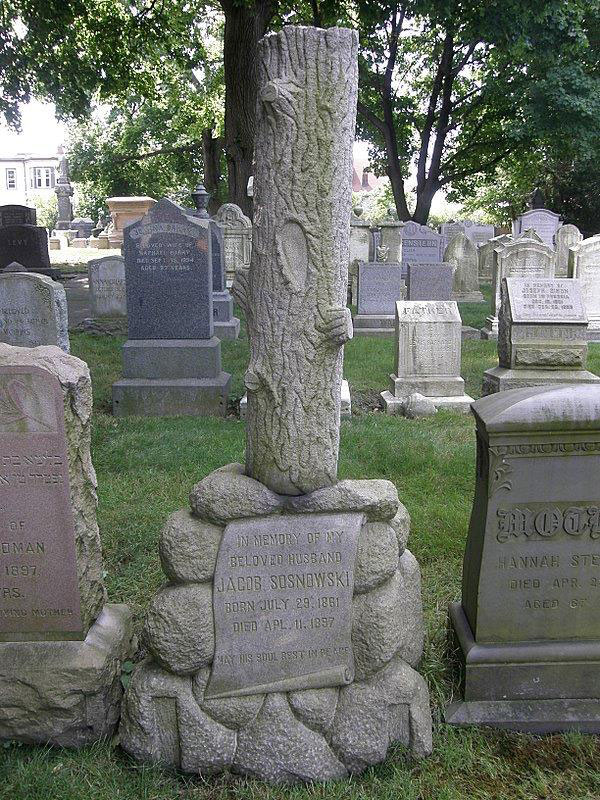 Most of the earlier grave markers are tall and narrow, as they had been in Eastern Europe. They feature common Jewish funerary motifs such as hands of blessing (the traditional symbol of a Cohen, or descendant of the ancient priests of Israel), hand-held ewers (the symbol of a Levite, servant of the priests), the felled tree of life (chaim), and the menorah. Hand-carved Hebrew inscriptions appear on the front of many of the older markers, with English text, when included, appearing on the reverse. 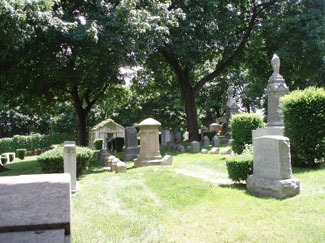 The markers in later sections tend to be more classically Victorian in style, reflecting the Jewish community's assimilation of American funerary taste. Indeed, some markers display typically Christian iconography such as sheaves of wheat. There are also many classical motifs such as obelisks, columns and urns.

The traditional iconography of the earlier 19th century headstones is absent from the large family monuments. The common forms for family monuments include obelisks, broken columns, pedestals with draped urns, and arks. These are designs that speak to the Classical and Romantic aesthetic traditions as well as to the improving economic status of the families who commissioned them. Significantly, inscriptions in these late 19th century areas of the Cemetery emphasize English, with Hebrew characters, when included, consigned to the rear of the monument or below the English epitaph. 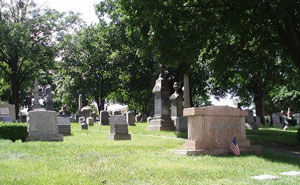 Twentieth century family monuments occupy most of the remaining portions of the Cemetery. These are typically of polished granite, with simple carving and inscriptions. Most inscriptions are in English and consist of the surname only.  Ornamentation is rare and limited to simplified Stars of David or stylized vegetative borders.

The design, architecture and monuments of Ohabei Shalom Cemetery document the attempt of Boston's first Jewish congregation to straddle its own religious identity and contemporary fashions of the dominant Anglo-Saxon culture.