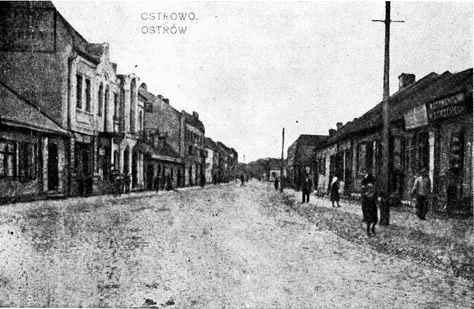 Ostrów-Mazowiecka (aka Ostrog, Ostroe) is a town in northeastern Poland. The intolerant attitude of the authorities of Masovia prevented the settlement of Jews for several centuries, and it was only during the 8th century that Jews succeeded in establishing themselves permanently.

By 1939, over 7,000 Jews lived in Ostrow-Mazowiecka and was a famous center of Jewish studies. The German army entered on Sept. 8, 1939, and two days later initiated a pogrom, killing 30 Jews.

At the end of September 1939 the German army withdrew for a few days and the Soviet army reached the town's suburbs since, according to the Soviet-German agreement, Ostrow-Mazowiecka became a frontier town on the German side. Almost all the Jews crossed over to the Soviet side. On Nov. 11, 1939, the Germans assembled the remaining 560 Jews, drove them to a forest outside the town, and murdered them. Most of the Jewish refugees from the town settled in Bialystok but many did not succeed in leaving when the Germans invaded the Soviet Union (June 1941), and they shared the tragic plight of the Jews in Bialystok.

The cemetery was founded in 1942 by the Ostro Hebrew Marshoe Cemetery Association. The cemetery was established as a “landsmanschaften” cemetery for the mutual benefit and aid of the people and relatives of the town of Ostrow-Mazowiecka.

The Ostro Hebrew Marshoe Cemetery was named in part after the town of Ostro and after a great Talmudic interpreter, The Maharshoa 1555-1631 (aka Rabbi Shmuel Eliezer ben Yehuda Eidelish). He lived, studied and taught Talmud in several cities and spent the last years of his life in Ostrow.

His mother-in-law, a wealthy woman, supported him and built the famous synagogue of Ostrow. Built like a fortress, it served the Jews of Ostrow and many Jews used it as a sanctuary from programs. The grave of The Maharshoa and the synagogue were carefully preserved until they were destroyed by the Nazis.

The founders of the Ostro Hebrew Marshoe Cemetery named it in memory of their former town and their famous rabbi as a benevolent and mutual aid society.

The cemetery merged with JCAM on February 8, 1989. 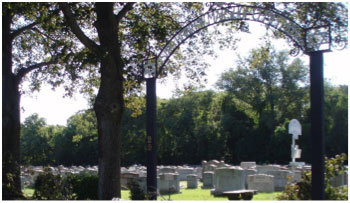 View of the Cemetery during springtime.