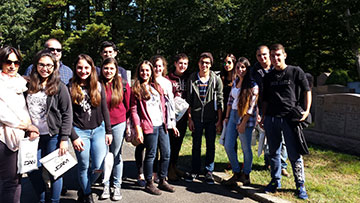 The teens were inquisitive and engaging as JCAM’s Director of Educational Programming, Lisa Berenson explained the differences in American Jewish cemeteries and Israeli cemeteries. The students were interested particularly in visiting all the graves of the cemetery’s Jewish war veterans. They learned how Jewish cemeteries were established in Massachusetts and the various headstone symbols found on Jewish cemeteries. Other topics discussed were some of the particular mourning and burial customs we have here in the U.S. versus in Israel.

HiBur brings a number of Israeli youth to Beth El every other year at Sukkot/Simchat Torah. JCAM was honored and delighted to have been included in their educational experience.